I have blogged previously about our amazing local veggie cafe – Crumbs Kitchen in Uplands, Swansea.  Well this week, the daytime cafe changed its identity and with the help of fairy lights, candles, a menu of small plates and alcohol it became Crumbs Kitchen at night.  The same wonderful welcome, the same lovely staff, the same community vibe just a bit more grown up.  My other half was away so nine year old Small Boy, seven year old Small Girl, Teddy Twt the Classroom Bear and I tripped down the hill to check out Becs and her Crumbs Crew.

It was dark but the candles and fairy lights beckoned us invitingly, my two dining companions were beyond excited, by the time we were met and shown to our table Becs intuitively was handing me a large glass of red wine, we were onto a winner!

I would challenge anyone not to find something they liked on the menu as it caters for veggie, vegan and pescatarian.  Our problem was not ordering everything on the menu and I had quite a challenge on my hands ensuring that the Small People didn’t over order.

Again, whilst speaking to my young companions, The Crumbs Crew realised that Small Girl needed to eat immediately so garlic bread appeared.  Saturated in garlic butter and herbs, crisp on the outside and soft on the inside it really was sublime.  We ordered Vegan Koftas, Potato Croquettes, Vegan Meatballs, Cod Goujons, Tempura Prawns, Veggie Paella, Double Cooked Chips and Onion Rings.  All the food was cooked to order and arrived with a smile and a chat that the Crumbs Crew are noted for.

I can honestly say there wasn’t anything I wouldn’t order again.  The Koftas were too spicy for the Small People but they have no tolerance for heat, I enjoyed them.  Unbelievably we managed to eat everything and I only got to eat two chips as they polished them off!

Pudding was a choice of chocolate brownie or strawberry cheesecake and again in their usual ‘nothing is too much trouble’ style, the kids were given a half potion of cheesecake each whilst I had another large glass of red.

I am amazed how hard these guys work – open six days a week and now Friday and Saturday evenings.  I urge local peeps to support them you won’t be disappointed.  If you don’t believe me I will leave the last word to my two small companions who are a tough crowd to please and make restaurant critics Jay Rayner and Grace Dent look like pushovers:

Small Girl: ‘You need to cook like this Mama!’

In fact I can’t let them have the last word – I’ve booked to take the mini critics and the other half next week. 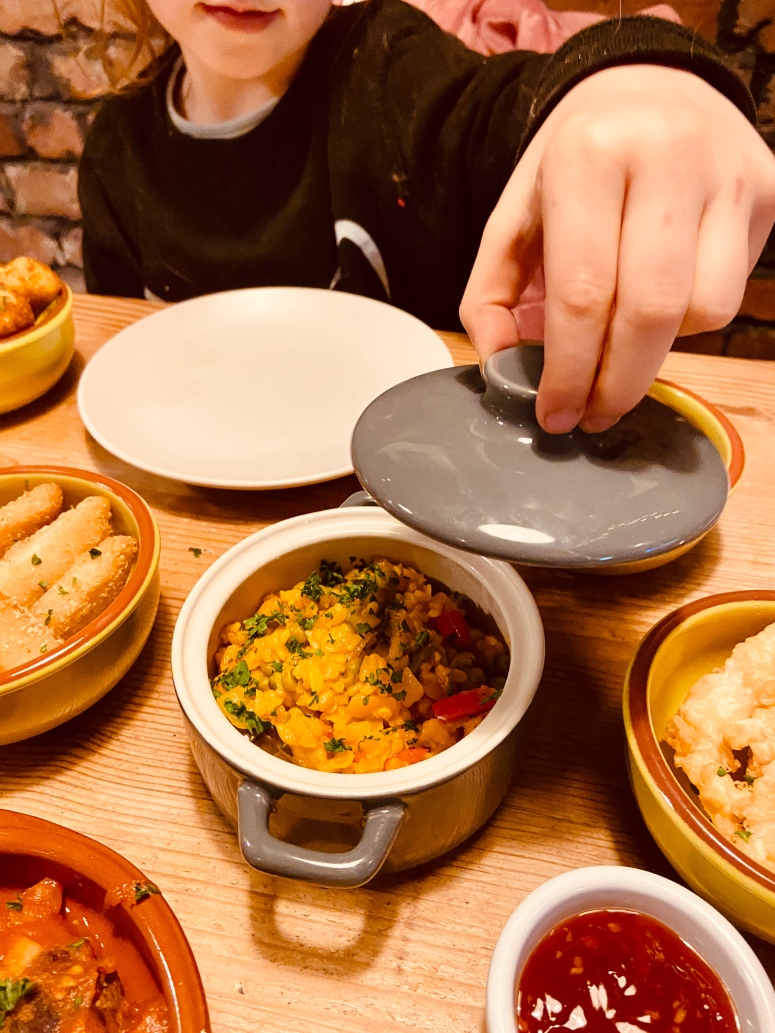